Moving forward Serverless Stack will be focussing on more advanced topics that can help you build production ready applications. We are setting ourselves an audacious goal of trying to cover almost everything that you’ll need to build a full-stack production ready serverless application. A first step in this direction is the launch of Part II of the guide. It focusses on the following:

Part II builds on everything we’ve created so far but is fairly standalone. So if you’ve completed the original, you can directly get started with Part II.

We go into details of the various aspects for the frontend and the backend in the various chapters. For 3rd party APIs we decided to go with Stripe. We know a few of you have built on the Serverless Stack to build applications that power your business. So in Part II we go over how to process credit card payments. It also happens to be a nice way to talk about how to work with secrets in your serverless backend.

A big part of creating a production ready app is configuring environments and automating deployments. Automating deployments is just making sure that you can simply git push to deploy your application. We are currently using a deployment service called Seed for the backend and Netlify for the frontend.

Serverless Stack is unlike any other tutorial on the web in terms of how comprehensive it is. A huge downside of this is that it can be hard to navigate your way around. With this update we have re-designed the Table of Contents. 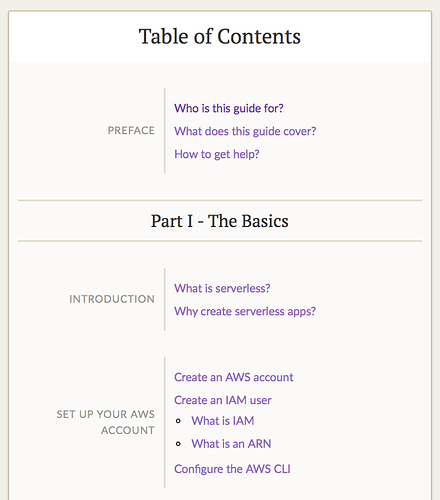 And each of the chapters gets their own little navigation sidebar. 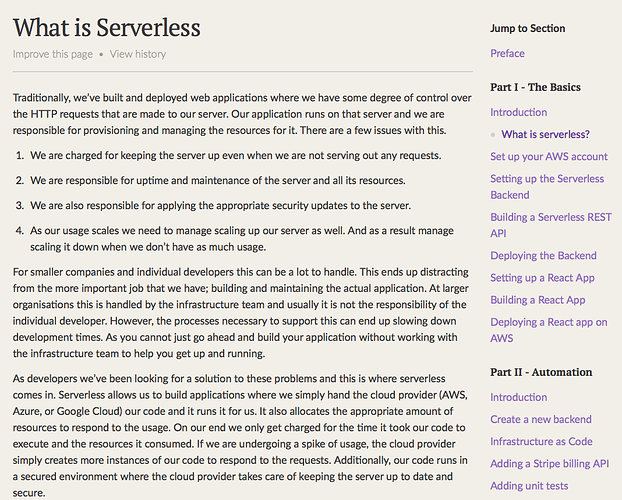 This let’s you jump between sections more easily and gives a sense of structure to the entire tutorial.

As you all know, we have been using the GitHub issues as comments for chapters. Some of these have gotten really long and GitHub just isn’t the best place for discussions. We also get requests for creating a chat/forum for the Serverless Stack community.

We got in touch with the guys at Discourse and they have been kind enough to host our forums for free. We have migrated most of the GitHub issues over and are now linking to our new forums.